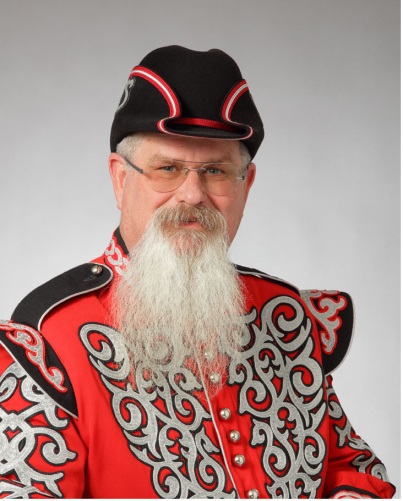 A lifelong resident of Wichita, Ken Atnip shares memories with many who grew up in the southeast area of the city: visits to Kiddieland, hanging out at the Boeing pool, playing little league baseball, skating at Joyland Skate Center and camping with his Boy Scout troop.

The oldest of three siblings, he attended Wichita schools, including Wichita East High School, where he spent many hours in shop classes learning technical crafts, and graduated in 1975. While attending college he worked second shift, earning a Bachelor of Science in criminal justice from Wichita State University.

At 21, he began his career in law enforcement, joining the Wichita Police Department. He served mostly in investigations, including 15 years fighting narcotics and working on SCAT, the department’s Special Community Action Team to deter drug- and gang-related crime. Captain Atnip commanded the Property Crimes Bureau prior to retiring after 33 years of dedicated service.

Grateful for many friends and opportunities, “too many to mention,” he and his family have enjoyed in their community, the Admiral has been dedicated to public service since early in his career. He is driven by these words from Luke 12:58, “to whom much is given, from him much is expected,” and is focused on giving to others to pay it forward for the blessings he has received.

The admiral began volunteering on the Riverfest Operations Team, nicknamed the Red Shirts, in the early 2000’s. Initially involved in Riverfest via his WPD role, he “quickly realized the importance of the event and how the work of festival staff and volunteers improves the overall quality of life for those who work and raise their families here.”

He has contributed his skills and dedication to every facet of the festival, doing set-up and tear down, working with national brands and touring exhibits, keeping the festival warehouse in tip-top shape, providing experienced guidance around event security and more. General Chair for Riverfest 2013, Atnip has been fundamental to the success of other Wichita Festivals events, including Autumn & Art, Vortex Music Festival and Bracket Bash, receiving the Galaxy Award, WFI’s most prestigious volunteer award.

Atnip has been a member of the Wichita Wagonmasters since 2009. He serves on the board of the Wichita Metro Crime Commission and is a recipient of their Twelve Apostles of Justice Award. He is a past president and current board member of Crime Stoppers Wichita/Sedgwick County.

The Admiral and his wife, Mylene, recently celebrated their 30th wedding anniversary. They have one son, Chase, who graduated from the University of Kansas and now lives in the Kansas City area.

At a Glance
* Born and raised in Wichita. Achieved the rank of Eagle Scout.
* Graduated from Wichita East High School in 1975. Earned a Bachelor of Science in criminal justice from Wichita State University.
* Married to his high school sweetheart, Mylene, for 30 years; one son, Chase.
* Retired as a Captain from Wichita Police Department after 33 years of service.
* A Wichita Wagonmaster since 2009. Currently serving as “Cookie” for the organization.
* General Chair for Riverfest 2013, Operations Committee member for more than 15 years and recipient of the prestigious Galaxy Award.
* Serves on the board of Wichita Metro Crime Commission and recipient of their Twelve Apostles of Justice Award. Past president and current board member of Crime Stoppers Wichita/Sedgwick County.