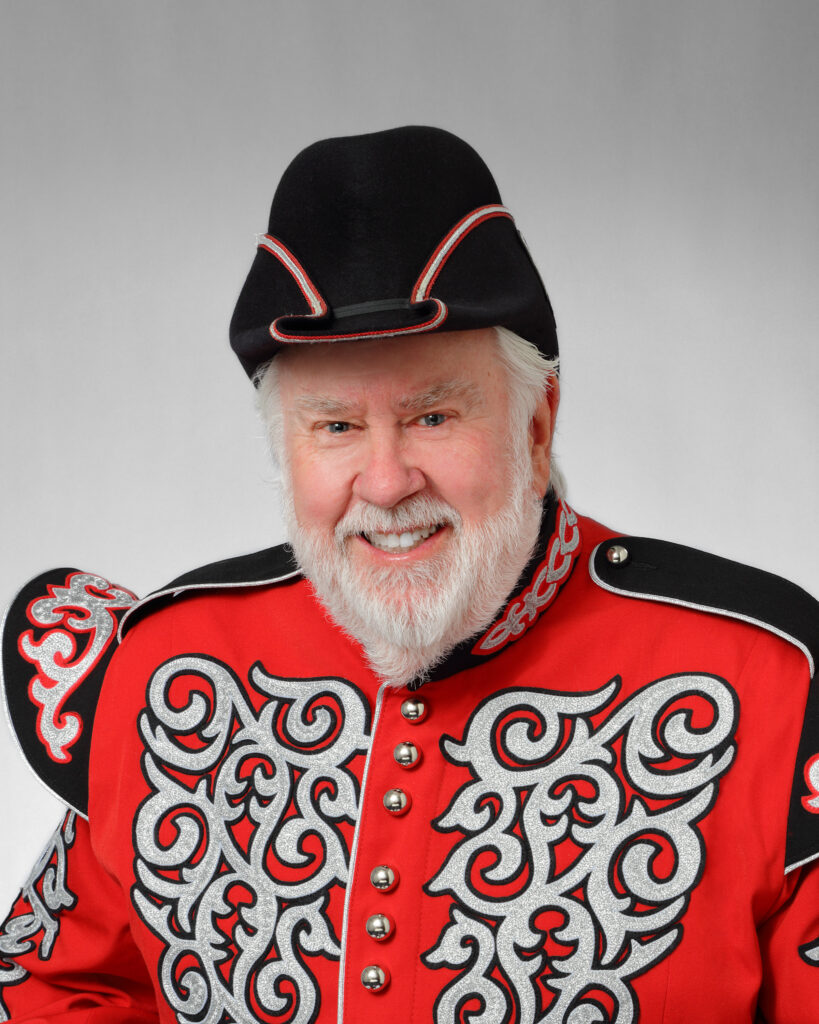 After 29 years in retail and 29 years in public service Tim Norton has embarked on the next phase of his public life as Admiral Windwagon Smith XLV, the official ambassador of Riverfest 2018.

“The River Festival has been part of the Family Norton’s life since we landed here in 1980,” said Norton. “Almost instantly we started attending the parade and fireworks, and for several years built floats in our garage for the parade.”

As Target Store manager, Norton took on the Senior Celebration, supplying prizes for bingo and a chicken dinner for seniors, and later sponsored the Arts in the Park event.  “But my best memory was years of leading the Target Shopping Cart Brigade in the Sundown parade with my golden plunger. Our employees loved it and the crowd went crazy. I am glad the crowd didn’t realize how un-organized the weaves and intricate routines really were!”

Norton served on the festival’s merchandise committee and was instrumental in bringing retail expertise and new marketing ideas to the table when white T-shirts were the only offering. As a Sedgwick County Commissioner, he ensured that the county had a presence in the parade and participated every year greeting parade watchers and handing out his County coins.

Norton’s other commitments to the community include years of service to the United Way of the Plains, the Salvation Army, Communities in Schools, Goodwill, Exploration Place, and the Wichita Chamber along with many other non-profit boards. He presently serves as the board chair of the WATC foundation and has recently accepted board positions for the Pando Initiative, the Child Advocacy Center of Sedgwick County, and Grace Med.  He has been recognized for his volunteer work and humanitarian work over the years.

“To say I am honored by this selection is an understatement,” Norton said.  “I have been extremely blessed with a supportive wife, wonderful kids and their spouses, and eight precious grandkids – not to mention work that I loved, a community that embraced me and now this,  the ‘cherry on top.’ I hope everyone joins me in celebrating what makes our community so special: a sense of place, great people AND a nine-day-long party!!”

Admiral XLV “At a Glance”
* Raised in Northeast Arkansas. Moved to Wichita in 1980 with Target Stores.
* Graduated high school in 1965. Received a Bachelor of Science in Journalism from Arkansas State University.
* Received a Masters in Adult Education from Newman University in 1996.
* Tim and wife Susan have five adult children (Laura, Tim, Scott, Anne, Sam) and eight grandchildren.
* Store team leader and master trainer for Target Stores for 22 years.  He left Target when the 1999 tornado hit Haysville while he was presiding as mayor.
* Served for nine years on the Haysville City Council, four years as Haysville Mayor, and 16 years as District 2 Sedgwick County Commissioner.
* While a County Commissioner he was deeply involved in the completion of the Intrust Bank Arena, the National Center for Aviation Training and
* A Wichita Wagonmaster since 1996.
* Chili Potentate for the Wagonmasters Chili Cook-off in 2010.