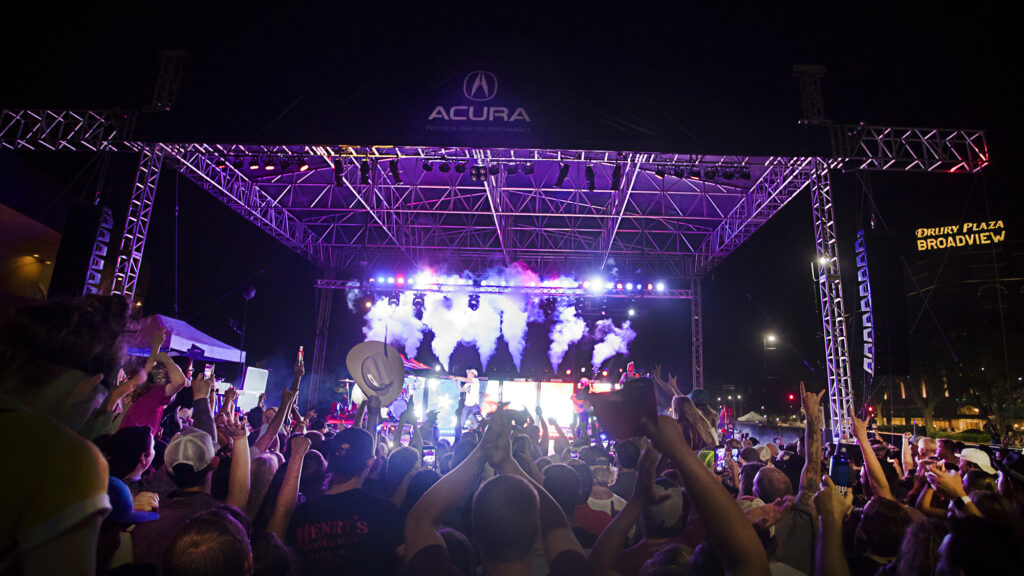 April 22, 2022 – WICHITA, Kan . – Wichita Festivals, Inc., along with its media partners, today announced Riverfest 2022’s concert headliners. Admission to every Riverfest concert is included in the price of an adult or child admission button.

“Nine days of concerts for only $15 is the best value in the country,” said Jenny Venn, director of marketing and communication at WFI. “The Riverfest concert line-up is just one of the several fun reasons to attend the festival, but live music is definitely an annual favorite.”

Tradition will rule on opening night, June 3, with the Wichita Symphony Orchestra’s Twilight Pops Concert on Kennedy Plaza. The concert follows the Safelite AutoGlass® Sundown Parade. The evening will end with the Textron Aviation Opening-Night Fireworks. The symphony concert and fireworks soundtrack will be broadcast live on FM 103.7 KEYN.

On Saturday, June 4, country music icon, Willie Nelson, will headline on the Wichita Acura Dealers Stage. Katie Jo, Chapel Hart and Charley Crockett will open for Nelson with KFDI as media partner for this event.

Sunday, June 5, Classic rock and funk will set the tone for the evening of the Downtown Get Down with Prodigals and The Freedom Affair opening for WAR, known for several hit songs including “Spill the Wine”, “The World Is a Ghetto”, “The Cisco Kid”, “Why Can’t We Be Friends?”, “Low Rider” and “Summer.” KEYN is media partner for this event.

Family favorite nights return on Monday, June 6 and Tuesday, June 7 with Gospel Fest kicking the week off. A Salute to Military is presented once again by Spirit Aerosystems.

American Southern rock jam band, Gov’t Mule, will rule Wednesday, June 8, on the Wichita Acura Dealers Stage, hosted by 104.5 The Fox and T-95. Local favorite Keo & Them and Mr. Sipp, an American blues and gospel singer, will kick off the show. Meanwhile, the Wichita Wagonmasters will dish up free ice cream at the Hiland Dairy Ice Cream Social on Douglas Avenue.

Funk and Electronica infused band The Floozies will perform on the Wichita Acura Dealers Stage on Thursday, June 9, hosted by Channel 96.3. Tommy Newport will play as well with INJN TRBL opening, during the traditional Goodwill Cajun Food Fest.

Friday, June 10 on the Wichita Acura Dealers Stage, an expanded and better than ever Fiesta del río will take over as Radio Lobo hosts Groupo Pesado with Bryndis por Siempre opening.

Riverfest 2022 will end on a commemorative note when psychedelic funk legends The Family Stone take over the Wichita Acura Dealers Stage with special guest Rudy Love Jr. for the Rudy Love Sr. and Mike Finnegan Tribute Night, Saturday, June 11. The Monophonics, a psychedelic soul band, will open for The Family Stone with the Love Family Band kicking off the evening entertainment. The show is hosted by media partners KEYN and POWER 93.5.

The Capitol Federal Fireworks Finale is back once again and will close the festival with a bang following The Family Stone on Saturday, June 11.

Admission to all Riverfest concerts is free with a Riverfest button. Adult buttons are $15, and children’s buttons (available while supplies last for kids ages 6-12) are $5. Buttons are available at an early-bird discount price of $10 for adults through May 5 at area Meineke Car Care Centers, located at Central and Washington, K96 and Woodlawn, 21st and Amidon, Webb and Central and Pawnee and Seneca in Wichita; in Derby and in Hutchinson. Full-price buttons will be available at QuikTrip locations beginning May 6.